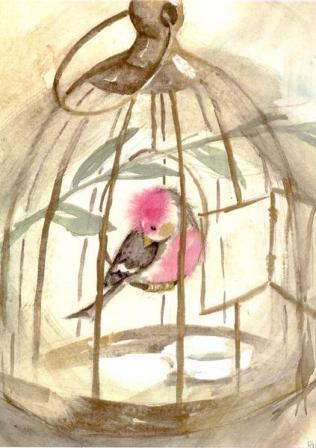 This is one of the best stories from our collection of short stories by American writers and it is adapted for the intermediate level. It is a story about women and their understanding.

The story tells that one day two women, the policeman’s wife and the sheriff’s wife, happened to accompany their men to the place of a crime, which had been commited in the lonely house of their old friend — Minnie Foster. It was Minnie Foster’s husband who was dead.

A Jury of Her Peers

Martha Hale hated to see things half done. She was baking bread when the sheriff and his team from town stopped to get Mr. Hale, and the sheriff came in to say that his wife wished her to come too. So she had to drop the flour unsifted right where it was.

She opened the door and joined the three men and the one woman waiting for her in the car. It was Mrs. Peters, the sheriff’s wife, a small and thin woman with a quiet voice.

The car drove off. The men were talking about what had happened.

«The country’s not very pleasant this time of year,» said Mrs. Peters at last.
Mrs. Hale didn’t answer. They were going up a little hill and now could see very well the place where the Wrights lived. The lonesome-looking place did not make her feel like talking. It was cold March morning.

«I’m glad you came with me,» Mrs. Peters said nervously as the two women were following the men into the house.

Martha Hale had never been to this house before. Time and time again she said to herself, «I must go over and see Minnie Foster»—she still thought of her as Minnie Foster, though for twenty years she had been Mrs. Wright. And then there was always something to do and she forgot about it. But now she would come.

It was cold in the house. The women stopped at the door. Young Henderson, the county attorney, went over to the stove and said, «Come up to the fire, ladies.» Mrs. Peters stepped forward, then stopped. «I’m not … cold,» she said, and so the two women stood by the door.

«Now, Mr. Hale,” said Sheriff Peters, “ before we move things about, you tell Mr. Henderson what you saw when you came here yesterday morning.»

The county attorney was looking around the kitchen.
«By the way,» he turned to the sheriff. «Are things just as you left them yesterday?»

Lewis Hale didn’t begin at once and looked queer — as if standing in that kitchen and having to tell what he had seen there yesterday morning made him almost sick.

«Harry and I had started to town with a load of potatoes,» Mrs. Hale’s husband began.

Harry was Mrs. Hale’s son. He wasn’t with them now, as he hadn’t been home when the sheriff came to take them to the Wright’s place.

«We come along this road and were near the house. And I say to Harry, ‘I’m going to see if I can get John Wright …»
But the county attorney interrupted with: «Mr. Hale, tell us what happened when you got here.»

«I didn’t see or hear anything. I knocked at the door. And it was all quiet inside. I knew they must be upstairs — it was past eight o’clock. So I knocked again, louder, and I thought I heard somebody say, ‘Come in.’ I wasn’t sure — I’m not sure yet. But I opened the door — this door,» and pointed at the door by which the two women stood, «and there, in that rocker sat Mrs. Wright.»