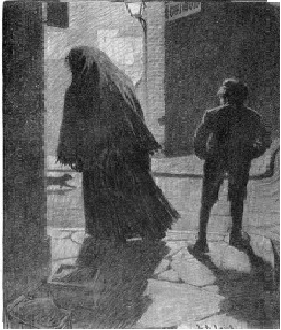 This is one more story by Jack London from the collection of «Stories in English for pre-intermediate». The story «The Apostate» is about a boy whose childhood is very similar to Jack London’s. It tells us about the life of children in America at the end of the 19th century. Hunger, exhaustion and labor were their destiny at that time.

The text of the story is divided into 8 parts, each of them has 7 new words to learn.

Copyright  © Englishstory.ru, 2016. Adaptation by T. Nabeeva
If your English is good enough, you can read Jack London. The Apostate (in the original)

«Leave me alone!»  he protested. But she continued waking him up.

When he felt the cold of the room, his eyes opened.  And he gave up.

She took the lamp and left him in darkness.

He did not mind the darkness. He put on his clothes and went out into the kitchen,  pulled a chair to the table and sat down.

He stood up from the chair, and, without a word, went to the sink. It was a dirty sink. A smell came up from it. But he didn’t notice it. That a sink should smell was natural to him.

«You must wash yourself once a day without being told,» his mother told him.

He dried himself on a dirty towel.

without being told – без напоминания

She put two cups of coffee on the table.

«I wish we didn’t live so far away,» she said when he sat down. «I try to do the best I can. You know that. But we can save a dollar on the rent, and we have more space here. You know that.»

He didn’t listen to her. He heard it all before, many times. She was always talking about how hard it was to live so far from the factory.

He ate the bread and drank the hot and muddy liquid, named coffee. Johnny never drank real coffee and found the drink excellent. That was one of the few of his illusions about life.  As he was finishing the bread, he began to watch if there was more coffee. His mother noticed it.

«Now, don’t be greedy, Johnny,» was her comment. «You’ve had your share. Your brothers and sisters are smaller than you.»

He did not answer. He was not talkative and he didn’t complain. He finished his coffee and stood up.

A distant whistle was heard. She looked at the alarm-clock on the shelf which showed half-past five.  «We’ve got to run,» she said. And they went down the stairs.