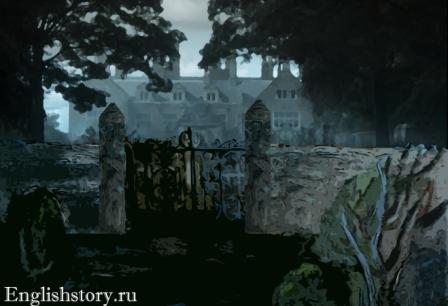 Time went by, and I thought less and less of my friend, the convict, as the months passed and we heard no more of him. Then there happened something which drove him quite out of my mind for a long time to come….

It was on a market-day it happened. My sister, as was sometimes her habit, had driven into town with Uncle Pumblechook to assist him in buying such stuffs and goods as required a woman’s judgment. They were late coming back to the forge. It was dark before we heard the sound of iron shoes upon the road, and the two of them drove up, wrapped to the eyes. We were soon all in the kitchen, and my sister began unwrapping herself in great haste and excitement.
“Now,” she said, fixing her eyes on me, “if this boy isn’t grateful this night, he never will be!”

“Why?” asked Joe, a puzzled look on his face.

“Because,” said my sister, “Miss Havisham up town wants this boy to go to her house and play there. And of course he’s going. And he had better play there,” she added, “or I’ll give him something to remember!”

“Well, to be sure!” cried Joe, astonished. “I wonder how she comes to know Pip?”

“Stupid!” answered my sister. “Who said she knew him? Uncle Pumblechook has to go there sometimes to pay his rent, and she asked him if he knew of a boy to go and play there. He, being a sensible man, unlike some, mentioned this boy here—whose fortune may be made by his going to Miss Havisham’s. Uncle has offered to take him into town tonight and then to Miss Havisham’s in the morning. And here I stand talking, with Uncle waiting, and this boy thick with dirt from head to foot!”

With that, she sprang upon me, and my face was put under the tap, and I was soaped and scrubbed and rubbed with towels until I was quite beside myself. When that was done, I was put into my best and tightest suit, delivered over to Uncle Pumblechook, and driven off to town without any idea why on earth I was going to play at Miss Havisham’s, and what on earth I was expected to play at.

At ten o’clock next morning, Uncle Pumblechook and I stood before the gate of Miss Havisham’s house. The gate was locked, so we had to wait, after ringing the bell, until someone should come and open it. While we waited, I looked through the bars of the gate and saw that the house was of old brick, and dismal, and all the windows had bars to them. There was a big yard in front, and I saw a young lady coming across it, with keys in her hand.

“This,” Mr. Pumblechook told her, when she had opened the gate, “is Pip.”

“This is Pip, is it?” returned the young lady, who was very pretty, and seemed very proud. “Come in, Pip.”

Mr. Pumblechook was coming in also, but she stopped him with the gate.

“It’s only the boy Miss Havisham wishes to see,” she told him coolly, and shut and locked the gate in his face. “Hurry, boy,” she said then, and we left him standing there with his mouth hanging open.

Though she called me “boy”, she was only about my age. She seemed much older than I, of course, being a girl, and very beautiful and confident; and she was as scornful of me as if she had been one-and-twenty, and a queen.

We went into the house by a side door and the first thing I noticed was that the passages were all dark, and that she had left a candle burning. She took it up, and we went up a staircase and along more passages, and still it was all dark, and only the candle lighted us.

I answered: “After you, Miss.”

“Don’t be stupid, boy,” she answered me. “I am not going in.” And she scornfully walked away and, what was worse, took the candle with her.

I was more than half afraid at being left there. However, I knocked at the door, and a voice called to me to enter. I went in, therefore, and found myself in a pretty large room, well lighted with wax candles. No glimpse of daylight was to be seen in it. In an arm-chair, with her head leaning on one hand, sat the
strangest lady I have ever seen, or shall ever see.

She was dressed in rich materials, all of white. Her shoes were white, and she had a long white veil hanging from her hair, and she had a bride’s flower in her hair, and her hair was white also. Bright jewels sparkled from her neck and on her hands, and some other jewels lay sparkling on the table. Dresses and halfpacked travelling-boxes lay all about the floor.

Then I saw that everything within my view which ought to be white, had been white long ago, and was now faded and yellow. I saw that the bride within the fine dress had no brightness left but the brightness of her eyes. I saw that the dress had been made for the figure of a young woman, and that the figure upon which it now hung loose was little more than skin and bone. She was like a skeleton that had dark eyes that were alive and looked at me. I almost cried out aloud, but I think I was too frightened to do so. 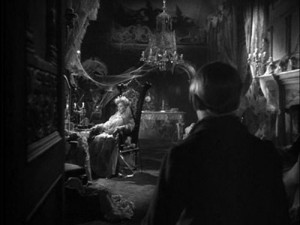 It was when I stood before her, avoiding her eyes, that I saw that the only clock in the room had stopped at twenty minutes to nine, and that her watch also had stopped at the same time.

“Look at me,” said Miss Havisham suddenly, and laid her hands, one upon the other, on her left side. “Do you know what I touch here?” she asked.

“Broken!” she cried, with a strange smile that had a kind of boast in it. Then the smile faded. “I am tired,” she said heavily, “and I have done with men and women. I have a sick fancy that I want to see someone play. Play, boy! Play!” She moved her fingers impatiently. “Play, play, play!”

I had no idea what to do. I just stood there looking at her.

“What’s the matter?” she asked sharply.

I broke off and we took another long look at each other.

“So new to him,” she said softly, “and so old to me! Call Estella. You can do that. Call Estella—at the door.”

To stand in the dark in a mysterious passage like a strange house calling “Estella” to the scornful young lady, was
almost as bad as playing to order. But she answered at last, and her light came flickering along the dark passage like a star.

Miss Havisham called her close. She took up a jewel from the table, and tried its effect against the girl’s pretty brown hair. “Let me see you play cards with this boy,” she said.

“With this common boy?” asked Estella, turning up her nose.

I thought I heard Miss Havisham answer—only it seemed so unlikely—“Well, you can break his heart.”

Estella laughed, and we sat down to cards.

“What coarse hands this boy has!” said Estella before our first game was done. “And what thick boots!”

I had never been ashamed of my hands or boots before, but I was from that moment on. She won the game, and I dealt the cards again. I made mistakes, as was only natural when I knew she was lying in wait for me to do wrong. She called me a stupid, common boy.

“You say nothing of her,” remarked Miss Havisham, as she looked on. “What do you think of her?”

“Tell me in my ear,” said Miss Havisham, leaning close.

“I think she is very proud,” I said in a whisper.

“I think she is very pretty.”

“I think she is most insulting.”

Estella gave a laugh at this.

“And never see her again, though she is so pretty?”

“I am not sure that I shouldn’t like to see her again, but I want to go home now.”

“You shall go soon,” Miss Havisham told me. “Finish the game first.”

I played the game to an end and Estella beat me once more. She threw the cards down on the table as if she despised them for having been won of me.

“When shall I have you here again?” Miss Havisham said. “Let me think. I know nothing of the days of the week. Come again after six days. You hear, boy?”

I followed the candle down, as I had followed the candle up. The rush of the daylight quite confused me, and made me feel as if I had been in the candlelight of the strange room for many hours. Estella unlocked the gate and stood aside to let me through. She smiled at me then, as if she was glad that my hands were so coarse and my boots so thick. I was going out without looking at her, when she touched me with her hand.

She laughed again, pushed me out, and kicked the gate upon me. I went straight to Mr. Pumblechook’s, and was much relieved to find him not at home. I set off on the four-mile walk to our village, thinking of all I had seen and filled with a deep regret that I was such a common, stupid boy, with coarse hands and thick boots. It seemed to me that I was in a thoroughly bad way!

Читать далее: Great Expectations by Charles Dickens. Chapter 5 «A Fight and a Kiss»