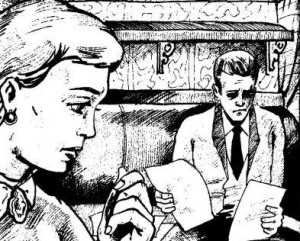 Thomas Hardy wrote the story «On the Western Circuit» about a love triangle. Two women, a young naive girl and a wise beautiful lady, fell in love with the same man. He started with the first but it somehow happened that continued with the second, not knowing that they changed over. When the truth was discovered, it was too late. Nobody woull be happy unless they broke out the rules of morality. Do you think that it it possible? Read and find out by yourself!

A Love Story by Thomas Hardy

On the Western Circuit

You have started reading the love story, but it seems difficult to you. Start with an easier level. You can chose from:

A young man was standing in front of the ancient cathedral in the city of Melchester. It was an October evening. The walls of the cathedral were not seen, but they reflected sounds of the street leading from the city square. It was getting dark and he decided to put off till the next morning his attempt to examine the deserted building and went along the street towards the square full of the noise and shouts.

The market square was occupied by the fair. In the centre of it there was a large steam roundabout. Lighting a short pipe, and putting his hat on one side and one hand in his pocket, he went towards it.

It could now be seen that he was unlike the other people in the crowd. He appeared to belong to the type found in large towns only, and London particularly. The delicate lines of his face, civilized look and a fashionable suit proved him to be a gentleman.

The revolving figures on the horses passed before his eyes. There were riders as young as six, and as old as sixty years old, with every age between. At first it was difficult to catch a personality, but by and by his eyes spotted the prettiest girl out of the several pretty ones revolving.

She was wearing the red skirt, dark jacket, brown hat and brown gloves. She was absolutely unconscious of everything ex­cept for the act of riding: for the moment she did not know her age or her history, much less her troubles.

The young man studied her as well as he could, glancing in­differently over the other riders. He had never seen such a natural beauty, and at each round she made a deeper impression on him.

When the roundabout stopped, she stayed at her seat. People began to take other seats, and clearly she was deciding to have another turn. The young man came up to her and asked her if she had enjoyed her ride.

‘O yes!’ she said, her eyes shone with joy. ‘It has been quite unlike anything I have ever felt in my life before!’

It was easy to fall into conversation with her. Unre­served — too unreserved — by nature, she was not experienced enough to be reserved by art, and answered his remarks readily.

She had come to live in Melchester from a village on the Great Plain, and this was the first time that she had ever seen a steam roundabout; she could not understand how such wonderful machine was made. She had come to the city on the invitation of Mrs Harnham, who had taken her into her household to train her as a servant.

Mrs Harnham was a young lady who before she married had been living in the country and had known her in childhood so well. She was even tak­ing the trouble to educate her. Mrs Harnham was the only friend she had in the world, and as she had no children she had wished to have her near her and allowed her to do almost as she liked, and have a holiday whenever she asked for it. The husband of this kind young lady was a rich wine-merchant of the town, but Harnham did not care much about him.

She, the speaker, liked Melchester better than the lonely country, and she was going to have a new hat for next Sunday that was to cost fifteen pence.Then she asked the young man where he lived, and he told her about London, that ancient and smoky city, where everybody lived and then died because they could not live there. He came into Wessex two or three times a year for professional rea­sons; he had arrived from Wintoncester yesterday, and was going on into the next county in a day or two. For one thing he did like the country better than the town, and it was because there were such girls as herself.

Then the roundabout, that pleasure-machine started again, and, to the light-hearted girl, the figure of the handsome young man, the market-square with its lights and crowd, the houses beyond, and the whole world, began moving round as before. Each time that she ap­proached him they looked at each other with smiles, and with that unmistakable expression which means so little at the moment, yet so often leads up to love, passion, heartache, union, devotion, disappointment and despair.

When the horses slowed again he stepped to her side and proposed another round.

She laughed till the tears came.

“Because — you are so genteel that you must have plenty of money!” she returned.

“Ha-ha!” laughed the young man in unison, and gallantly produced his money for another round.

As he stood smiling there in the crowd, with his pipe in his hand, and wearing the rough jacket and a simple hat that he had put on for his walk, who would have supposed him to be Charles Bradford Raye, Esquire, stuff-gownsman, now going the Western Circuit, detained in Melchester by a small arbitration after his colleagues had moved on to the next county-town?