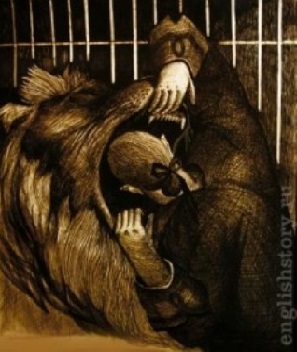 Recently in search of something interesting for the website I have read a lot of stories by different writers, especially Jack London. Among his short stories I found this one, which was rather different from others. I couldn’t stop reading it up to the end. Jack London is at his best as usual. The story is about a circus artist whose name was Leopard Man. He dealt with lions and they obeyed his commands quietly. He was a cruel man, not without reason he was called The Leopard Man.

«The Leopard Man’s Story» is one of the most unusual Jack London’s short stories.  Read online and enjoy the story in the original.

The Leopard Man’s Story (in English, in the original)

He had a dreamy, far-away look in his eyes, and his sad, insistent voice, gentle-spoken as a maid’s, seemed the placid embodiment of some deep-seated melancholy. He was the Leopard Man, but he did not look it. His business in life, whereby he lived, was to appear in a cage of performing leopards before vast audiences, and to thrill those audiences by certain exhibitions of nerve for which his employers rewarded him on a scale commensurate with the thrills he produced.

As I say, he did not look it. He was narrow-hipped, narrow-shouldered, and anaemic, while he seemed not so much oppressed by gloom as by a sweet and gentle sadness, the weight of which was as sweetly and gently borne. For an hour I had been trying to get a story out of him, but he appeared to lack imagination. To him there was no romance in his gorgeous career, no deeds of daring, no thrills—nothing but a gray sameness and infinite boredom.

Lions? Oh, yes! he had fought with them. It was nothing. All you had to do was to stay sober. Anybody could whip a lion to a standstill with an ordinary stick. He had fought one for half an hour once. Just hit him on the nose every time he rushed, and when he got artful and rushed with his head down, why, the thing to do was to stick out your leg. When he grabbed at the leg you drew it back and hit hint on the nose again. That was all.

With the far-away look in his eyes and his soft flow of words he showed me his scars. There were many of them, and one recent one where a tigress had reached for his shoulder and gone down to the bone. I could see the neatly mended rents in the coat he had on. His right arm, from the elbow down, looked as though it had gone through a threshing machine, what of the ravage wrought by claws and fangs. But it was nothing, he said, only the old wounds bothered him somewhat when rainy weather came on.

Suddenly his face brightened with a recollection, for he was really as anxious to give me a story as I was to get it.

He paused and looked pensively at a sick lion in the cage opposite.

«Got the toothache,» he explained. «Well, the lion-tamer’s big play to the audience was putting his head in a lion’s mouth. The man who hated him attended every performance in the hope sometime of seeing that lion crunch down. He followed the show about all over the country. The years went by and he grew old, and the lion-tamer grew old, and the lion grew old. And at last one day, sitting in a front seat, he saw what he had waited for. The lion crunched down, and there wasn’t any need to call a doctor.»

The Leopard Man glanced casually over his finger nails in a manner which would have been critical had it not been so sad.

«Now, that’s what I call patience,» he continued, «and it’s my style. But it was not the style of a fellow I knew. He was a little, thin, sawed-off, sword-swallowing and juggling Frenchman. De Ville, he called himself, and he had a nice wife. She did trapeze work and used to dive from under the roof into a net, turning over once on the way as nice as you please.

«De Ville had a quick temper, as quick as his hand, and his hand was as quick as the paw of a tiger. One day, because the ring-master called him a frog-eater, or something like that and maybe a little worse, he shoved him against the soft pine background he used in his knife-throwing act, so quick the ring-master didn’t have time to think, and there, before the audience, De Ville kept the air on fire with his knives, sinking them into the wood all around the ring-master so close that they passed through his clothes and most of them bit into his skin.

«The clowns had to pull the knives out to get him loose, for he was pinned fast. So the word went around to watch out for De Ville, and no one dared be more than barely civil to his wife. And she was a sly bit of baggage, too, only all hands were afraid of De Ville.