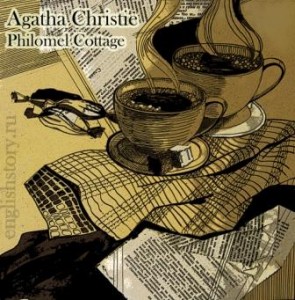 Alix Martin stood leaning over the small wooden gate, watching her husband, as he walked down the road in the direction of the village. Soon he was lost to sight, but Alix still stayed in the same position, her eyes far-away and dreamy.

Alix Martin was not beautiful, nor even pretty. In her youth she had been a businesslike young woman, efficient, slightly brusque in manner. For fifteen years, from the age of eighteen until she was thirty-three, she had kept herself (and for seven years of the time, an invalid mother) by her work as a typist. It was the struggle for existence which had hardened the soft lines of her girlish face.

She had had a friend. It was Dick Windyford, a clerk in the office. Alix had always known that he cared for her. But Dick had a younger brother and out of his low salary he had to provide for his schooling and look after him. For the moment, he could not think of marriage. However, when Alix thought about the future, she was almost sure that she would be Dick’s wife one day. They cared for one another but they were both sensible people. Plenty of time, no need to hurry. So the years had gone on.

And then suddenly in the most unexpected manner a distant cousin had died leaving money to Alix. A few thousand pounds, enough to live on for a year. To Alix, it was freedom, life, independence. Now she and Dick need wait no longer. But Dick reacted unexpectedly. He had never openly spoken of his love to Alix, now he seemed less inclined to do so than ever. He avoided her, became morose and gloomy.

Alix was quick to realize the truth. She had become a rich woman. Delicacy and pride stood in the way of Dick’s asking her to be his wife. She liked him none the worse for it and was thinking whether she herself should take the first step when for the second time the unexpected happened to her. She met Gerald Martin at a friend’s house. He fell violently in love with her and within a week they were engaged. Alix, who had always considered herself «not the falling-in-love kind,» was swept off her feet.

When Dick Windyford knew about it, he was not angry, he was enraged. «The man’s a perfect stranger to you. You know nothing about him.»

«It doesn’t take everyone eleven years to find out that they’re in love with a girl,» cried Alix angrily.

His face went white.»I’ve cared for you ever since I met you. I thought that you cared also.»
«I thought so, too,» she admitted. «But that was because I didn’t know what love was.»

Then Dick had burst out again. Prayers, entreaties, even threats. It was amazing to Alix to see the volcano that existed beneath the reserved exterior of the man she thought she knew so well. Her thoughts had gone back to that talk now, on this sunny morning, as she leaned on the gate of the cottage. She had been married a month, and she was idyllically happy. Yet, in the absence of the husband who was everything to her, a tinge of anxiety invaded her perfect happiness, and the cause of that anxiety was Dick Windyford.

Three times since her marriage she had dreamed the same dream. The environment differed, but the main facts were always the same.

She saw her husband lying dead and Dick Windyford standing over him, and she knew clearly and distinctly that his was the hand which had dealt the fatal blow. But the most horrible thing was that on awakening, she, Alix Martin, was glad that her husband was dead — she stretched out grateful hands to the murderer, sometimes she thanked him.

The dream always ended the same way, with herself clasped in Dick Windyford’s arms. She had said nothing of this dream to her husband, but secretly it had disturbed her more than she liked to admit. Was it a warning — a warning against Dick Windyford?