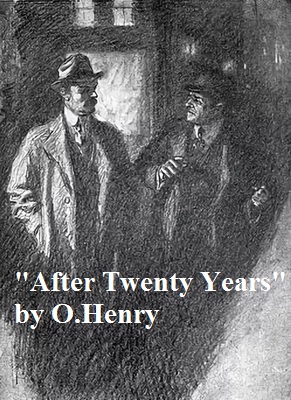 The story «After twenty years» is one of the best short stories by O.Henry. It has a surprising end, which is peculiar to the author.

The story is adapted for the pre-intermediate level and is easy to read. It is very short and has only one page.

We advise you to learn the synonyms for the most difficult words from the story before reading it.

Other short stories by O.Henry are included in the list at the end of this one.

Your feedback of the story is appreciated in the comments. Enjoy reading and learning English!

A Short Story by O. Henry «After Twenty Years»

This short story by O. Henry is adapted for englishstory.ru © 2017

The policeman walked along the street looking important. The time was nearly ten o’clock at night and it was cold. There was a wind with a little rain. The policeman looked up and down the street. Cigar shops or cafes that work all night were open; but most of the shop doors were closed.

In the middle of one street the policeman suddenly began to walk slowly. In the doorway of one shop stood a man, with an unlighted cigar in his mouth. When the policeman came up to him, the man spoke quickly.

«Everything is all right, officer,» he said. «I am waiting for my friend. Twenty years ago we decided to meet here. It seems funny, doesn’t it? If you want, I can explain to you. There used to be a restaurant here very long ago. It was called «Big Joe Brady’s’.»

«It was here until five years ago,» said the policeman. The stranger struck a match and lit his cigar. A pale face with clever eyes was seen. There was a little white scar near his right eyebrow. On his scarf he had a large diamond pin.

«On this very day twenty years ago,» said the stranger, «I had dinner here at this restaurant with my best friend, Jimmy Wells. He was the best man in the world. He and I were like two brothers. I was eighteen and Jimmy was twenty then. The next morning I was to go to the West to make my fortune. Jimmy didn’t go with me because he liked this city most of all and didn’t want to leave. We decided to meet here again. We thought that in twenty years each of us ought to become someone and earn some money.»

«Your story is very interesting,» said the policeman. «It’s a very long time between two meetings. Haven’t you heard from your friend since then?»

«Yes, we wrote to each other for some time,» answered the other. «But a year or two passed and we lost track of each other. But I am sure Jimmy will come to meet me. He was really a true friend. He cannot forget. I came a thousand miles to be here this evening.»

The man took out a beautiful watch with small diamonds on its lid.
«Three minutes to ten,» he said. «We agreed to meet at exactly ten o’clock.»
«You were successful in the West, weren’t you?» asked the policeman.
«Yes, really! I hope Jimmy is successful, too.»
«I have to go now,» the policeman said. «I hope your friend will come soon.»
«So long, officer.»
«Good night, sir,» said the policeman and went away.

There was now a cold rain and the wind became stronger. The man who had come a thousand miles for a meeting with his friend stood smoking his cigar at the door of the shop.

He waited about twenty minutes when a tall man appeared. He was in a long coat and the collar was turned up to his ears. He went in the direction of the man.
«Is that you, Bob?» he asked hesitatingly.
«Is that you, Jimmy Wells?» cried the man.

«It’s really you!» exclaimed the newcomer. «I was sure I could meet you here. Well, well, well! Twenty years have passed. It’s a pity the old restaurant has gone, Bob. We could have had one more dinner and quiet talk. How was your life in the West?»

«Well, I have everything now I could only dream of. You’ve changed much. I thought you were shorter.»
«Yes, I’ve grown a little since then.»
«Are you successful in New York, Jimmy?»
«In a way. I work in one of the city departments. Let’s go around the city and talk about old times.»

The two men walked up the street, arm in arm. The man from the West was telling the story of his life and career. The other one listened with interest but was silent.

There was a drugstore at the corner of the street. Its electric lights were shining brightly. When they came into the light they looked at each other at the same time.

The man from the West stopped suddenly.
«You are not Jimmy Wells,» he cried. «Even twenty years could not change a man so much.»

«But they could change a good man into a bad one,» answered the tall man. «You are under arrest, ‘Silky Bob. We’ve got a telegram from Chicago that they want to see you. You are not going to resist, are you? Very good. I have a note here for you. You may read it near the window. Patrolman Wells wrote it.»

The man from the West took a little piece of paper. His hand was steady when he began to read, but it started to tremble by the time he had finished. This note was not very long.

«Bob: I was at the place of our meeting on time. When you struck a match I saw the face of the man wanted in Chicago. I could not do it myself, so I asked another man to do the job.
Jimmy.»

Read the most famous short stories by O. Henry:
4 thoughts on “A short story by O. Henry. After Twenty Years (for pre-intermediate)”