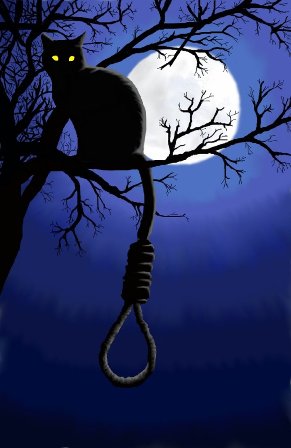 Edgar Poe. The Black Cat (in English, adapted for upper-intermediate)

I was a kind child. I was fond of animals and always had lot of them. With them I spent my time and felt happy. When I grew up I still had my love for the living creatures as it was deep in my tender heart.

I married early and was happy to find a woman who I could share my love for animals. We had a lot of pets: birds, gold-fish, a fine dog, rabbits, a small monkey and a cat.

But years passed and my character changed because I suffered from a decease. The decease was drinking alcohol! Day by day I became more moody and more irritated. I did not care about the feeling of the others. I became rude with my wife. My pets, of course, felt the change in my character as I treated them badly if they came in my way. But I still had my affection for Pluto. But soon Pluto, who was old now ,— even Pluto began to suffer from my ill temper.

One night I came back home drunk. The cat got in my way and I seized him. He was frightened by my violence and bit my hand with his teeth. I got furious. It seemed as if my soul left my body and a demon got there instead. I took a pen-knife, opened it and cut one of his eyes from the socket!

When I got up in the morning and saw the poor thing, I felt half of guilty of the crime. To tell the truth, my soul became calm and soon I drowned in wine all memory of it.

The cat slowly recovered. Now he had frightful appearance, but he no longer suffered any pain. He went about the house as usual but always ran away when he saw me. At first I felt uneasy about the creature which had once so loved me. But this feeling soon gave place to irritation which in its turn changed into anger. So one morning, in cool blood, I put a rope about his neck and hung him on a tree. The tears were in my eyes because I knew that Pluto had loved me. But I finished the cruel thing.

On the night of the next day, I woke up by the cry of fire. The curtains of my bed were in flames. The whole house was on fire. It was with great difficulty that my wife, a servant, and myself escape from the place. My house was destroyed by fire. Now I was a poor man.

Did the disaster happen because of my cruel deed? The next day I visited the ruins. All the walls had fallen in. The only wall left was the wall of my bedroom. I saw people who were standing in front of the wall looking at something there. I came near and saw on the wall the figure of a gigantic cat with a rope on its neck.

I felt terror. Suddenly I remembered that the cat was hung in a garden near the house. I thought that during the fire some person probably cut the animal from the tree and threw it into my room through an open window to wake me up. When the walls of my room fell, they pressed it to the wall and the flames made the picture on the new plaster.

The time passed. One night when I was sitting in a pub, I suddenly saw a black object on one of the barrels. I came to it and touched it with my hand. It was a black cat—a very large one — as large as Pluto. It looked like Pluto with the only difference that his breast was white. He was one-eyed too but at that time I didn’t notice it.

I touched him and the cat started purring loudly and rubbed against my hand. I asked people around but nobody had seen the cat before.

When I prepared to go home, the animal wanted to accompany me. I let him do so and decided to let him live in my house. At once he became a favourite pet with my wife. As for me, I felt some dislike for him. Soon the feeling of dislike changed into hatred. I tried to avoid the creature as he reminded me of my cruel deed.

I hated the cat but he loved me very much. He followed me everywhere about the house. If I sat, he jumped upon my knees. If I wanted to go for walk, he would get between my feet trying to stop me. At such times I wanted to hit him hard but the memory of my former crime prevented me from doing so. And more than that — I was afraid of the beast.

This cat never left me alone. When I went to sleep, I felt his large weight upon my heart. When I woke up, I felt his hot breath upon my face. Evil thoughts started to be born in me. To tell the truth, I was full of hatred to all the mankind and my poor wife was the most usual and the most patient of sufferers.

One day my wife accompanied me into the cellar of the old building where we lived. The cat followed us downstairs and got between my feet so I was about to fall down the steep stairs. In fury I grasped the axe and aimed a blow at the animal. My wife tried to stop me but I became mad and buried the axe in her brain. She fell dead upon the floor.

After I killed my wife, I started thinking where to hide the body. I knew that I could not remove it from the house, either by day or by night because my neighbours would definitely see me. At first, I thought of cutting the corpse into fragments and destroying them by fire. Then I wanted to dig a grave for it in the floor in the cellar. Then I decided to throw it in the well in the yard. Finally, I made up my mind to wall it up in the cellar.

In one of the walls there was a niche that was hidden by bricks and covered by plaster. I could readily displace the bricks at this point, put the corpse there, and wall the whole up as before, so that no eye could see anything suspicious.

It was a good idea. I easily displaced the bricks and carefully put the body incide the niche against the inner wall. Then I put the bricks back and covered the new wall with a plaster, which was the same as the old. When I had finished, I felt glad that all was done. The wall looked the same. I removed the rubbish from the floor and said to myself— «At last the thing is over.»
My next step was to look for the cat which was the cause of this murder; as at that moment I made up my mind to put it to death. But the cat disappeared. I was happy not to see this evil creature that made me do such a hideous murder.

The second and the third day passed and still the cat did not appear. I breathed as a free man. The monster, in terror, had left me forever! My happiness was great! The guilt of my dark deed disturbed me but little.

The police searched for my wife but of course the body was not found. I looked upon my future as secured.

But on the fourth day the police came into the house and started again to search it everywhere. I felt no fear however. I was calm. For the third or fourth time they went into the cellar. My heart beat calmly as I stood still with my arms folded upon my bosom. The police found nothing and prepared to leave. The happiness at my heart was so great that cannot but say a word of triumph.

«Gentlemen,» I said, «I am happy that you find me not guilty. I wish you all health. By the way, gentlemen, this—this is a very good old house. These walls are made of bricks and … Are you going, gentlemen?» and then I didn’t understand why I rapped heavily on that very part of the brick wall behind which stood the corpse of the wife.

A quiet cry like the sobbing of a child was heard from within the tomb! The cry quickly turned into a long, loud and continuous scream, half of horror and half of triumph, which seemed to come out of hell!

For a moment the party stand still. In the next, a dozen arms were working at the wall. The corpse already rotten came before the eyes of the spectators. Upon its head sat the hideous one-eyed beast. I had walled the cat >up with the corpse!