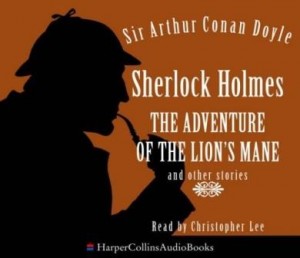 It is a most unusual problem which I have had in my long professional career. It happened when I returned to my little home in Sussex and decided to live close to nature which I had often lacked during the long years spent amid the gloom of London. At this period of my life Watson was a rare guest at my place. So, I have to tell my story in my own plain way, using my words to describe the difficult road which lay before me as I searched for the mystery of the Lion’s Mane.

My villa is situated upon the southern coast and has a great view of the English Channel. At this point the coast-line consists of chalk cliffs and the only way down to the sea is a long steep slippery path. At the bottom of the path there are hundred yards of pebbles and a lot of hollows which are full of water after each tide. This admirable beach extends for some miles in each direction.

My house is lonely, only I, my old housekeeper, and my bees. Half a mile off, however, is the Gables, quite a large place, where young fellows are prepared for various professions. Among the teachers was Harold Stackhurst, a well-known scholar. He and I were always friendly from the day I came to the coast, and he was the only man who could drop in on me in the evenings without an invitation.

It happened at the end of July, 1907. For a week there was a strong wind, which blew from the Channel. At last the wind dropped, and the following morning all nature was so beautiful that it was impossible to work on such a delightful day. So I went out before breakfast to enjoy the fresh air. I descended the cliff path which lead to the beach. As I was walking, I heard a shout behind me, and there was Harold Stackhurst, waving his hand in greeting.

“What a morning, Mr. Holmes! I thought I should see you out.”

“Yes. McPherson started early, and I expect to find him there.”

Fitzroy McPherson was the Science teacher, a fine young fellow. Although he had a weak heart he was a natural athlete, and in summer and winter he went for his swim. I am a swimmer myself, so I have often joined him.

At this very moment we saw the man himself. His head showed above the edge of the cliff where the path ends. Then his figure appeared at the top, staggering like a drunken man. The next moment he threw up his hands and, with a terrible cry, fell upon his face. Stackhurst and I ran forward — it may have been fifty yards — and turned him on his back. He was dying. Those glazed sunken eyes and dreadful livid cheeks could mean that. The last words he said were very indistinct, something like “the Lion’s Mane.” Then he half raised himself from the ground, threw his arms into the air, and fell forward on his side. He was dead.

My companion was paralyzed by the sudden horror of it, but not me. It was clear that the case was extraordinary. The man was dressed only in his raincoat, his trousers, and an unlaced pair of shoes. As he fell over, his raincoat slipped off and exposed his body. We stared at it in amazement. His back was covered with dark red lines. It seemed that he had been terribly whipped by a thin wire scourge. There were also long scars round his shoulders and ribs. There was blood on his chin and his distorted face told how terrible that agony had been. 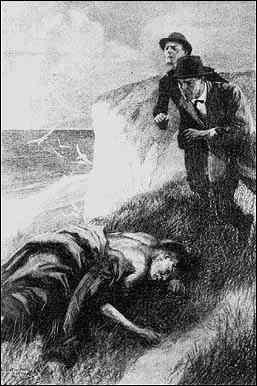 Harold and I were examining the body when  Ian Murdoch came to us. Murdoch was the Maths teacher at the Gables, a tall, dark, thin man, so reserved that he had no friends. He seemed to live in some high abstract world, with had nothing in common with our ordinary life. He was looked upon as a very strange man but there were some sudden outbreaks of anger. On one occasion, when he was annoyed by a little dog belonging to McPherson, he had caught the creature and threw it through the window. Such was the strange man who was standing beside us. He seemed to be shocked at the sight before him, though the incident with the dog may show that he didn’t like McPherson very much.

“Were you with him? Can you tell us what has happened?”

“No, no, I was late this morning. I was not on the beach at all. I have come straight from the Gables. What can I do?”

“You can hurry to the police-station at Fulworth. Report the matter at once.”

Without a word he ran off, so Harold and I remained by the body.