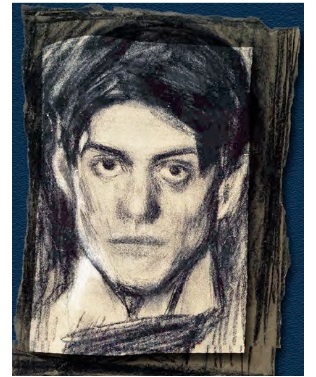 «A Portrait of his son» is a short story that tells us about our parents’ love. It is touching and a bit sad. The story is adapted for the intermediate level and attached with the translation into Russian (for subscribers). It has a surprising end and you are sure to enjoy reading it on a Christmas evening and not only.

A Portrait of his Son

(a short story for intermediate level)

Years ago, there was a very rich man whose main interest in life was art collecting. He was a widower and he had a son, who shared his father’s passion. Together they travelled around the world, buying the finest pictures for their collection.

War put an end to their travels. The young man left to serve his country. After a few weeks, his father got the news that the young man had died while taking a fellow soldier to hospital.

Miserable and lonely, the old man thought about the upcoming Christmas holidays. On Christmas morning, a knock on the door awakened the depressed old man. As he opened the door, he saw a young soldier with a large package in his hand. ‘I was a friend of your son,’ he said. ‘I was the one he was rescuing when he died. May I come in? I have something to show you.’

The soldier told the old man how his son had saved his life and how everyone in the regiment loved and respected him.

‘I’m an artist,’ said the soldier, ‘and I want to give you this.’ He handed the package to the old man. The old man unwrapped the package and saw that it was a picture — a portrait of his son. The old man knew enough about art to understand that the picture was not the work of a genius, but it was his son’s face, his features, his expression… The likeness was striking.

The painting of his son soon became his most prized possession. He valued it more than the pieces which museums around the world would be proud to have.

The following spring, the old man became ill and died. As he had no relatives, all his paintings were to be sold at an auction. According to the will of the old man, the pictures had to be auctioned on Christmas day, the day he had received his greatest gift. Art col­lectors from around the world gathered to buy some of the world’s most famous paint­ings.

The auction began with a painting that was not on any museum’s list. It was the painting of the man’s son. The auctioneer asked for an opening sum. The room was si­lent. ‘Who will start with $100?’ he asked. No one spoke. Minutes passed. From the back of the room came, ‘Who cares about that painting? It’s just a picture of his son. Let’s forget it and go on to the good stuff.’

‘No, we have to sell this one first,’ replied the auctioneer. ‘Now, who will take the son?’

After a few minutes, a man stood up and said, ‘I’m not an art collector, I just knew the father and the son, and I’d like to have the boy’s portrait, if nobody wants it. But I have only ten dollars.’

‘Ten dollars. Will anyone go higher?’ called the auctioneer. ‘Going once, going twice. And now the auction is over.’

The room went quiet. Everybody looked at the auctioneer in disbelief. Then somebody asked, ‘What do you mean it’s over? We didn’t come here for a picture of some old man’s son painted by an artist nobody has heard of. What about all these paintings?’

The auctioneer replied, ‘It’s very simple. According to the will of the father, whoever takes the son … gets it all.’

Перевод на русский язык рассказа «A Portrait of his Son»