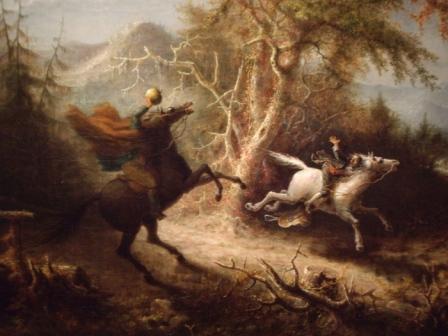 October has come with its cold days and long nights….  Halloween is coming… It is time to read online a scary story in English, it is  «The Legend of Sleepy Hollow» by Washington Irving. It is adapted from the original story «The Sketchbook of Geoffrey Crayon» (1820) for the advanced readers by me, the hostess of EnglishStory. Enjoy English Classics!

If the text seems difficult to you, you can watch the animation «The Legend of Sleepy Hollow»

A pleasing land of drowsy-head it was,

Of dreams that wave before the half-shut eye…

Near the eastern shore of the Hudson, at the broad part of the Hudson river, there lies a small market-town called Greensburg, but which is more generally known by the name of Tarry Town. Not far from this town, perhaps about two miles, there is a little valley among high hills. This is one of the quietest places in the whole world. A small brook glides through it, with just murmur enough to lull one to rest, and the occasional whistle of a quail or tapping of a woodpecker is almost the only sound that ever breaks in the complete calmness.

From the quietness of the place and the peculiar character of its inhabitants, who are descendants from the original Dutch settlers, this isolated valley has long been known by the name of SLEEPY HOLLOW. A drowsy, dreamy influence seems to hang over the land and to pervade the very atmosphere. Some people say that the place was bewitched by an old Indian chief during the early days of the settlement. Certain it is, the place still holds a spell over the minds of the good people, causing them to walk in a continual dreaminess. They are subject to trances and visions, and frequently see strange sights and hear music and voices in the air. The whole neighborhood abounds with local tales, haunted spots, and twilight superstitions; stars shoot and meteors glare more often across the valley than in any other part of the country, and the nightmare seems to make it the favorite place of her walks.

The dominant spirit, however, that haunts this enchanted region is the apparition of a figure on horseback without a head. The ghost is said to be a Hessian trooper whose head had been carried away by a cannonball in a battle during the Revolutionary War, and who is ever seen by the country people hurrying along in the gloom of night as if on the wings of the wind. He is sometimes seen in the valley but more often near a church at no great distance. Indeed, the body of the trooper is believed to have been buried in the churchyard, the ghost rides forth to the scene of battle in nightly search of his head, and that rushing speed with which he sometimes passes along the Hollow is due to his being in a hurry to get back to the churchyard before daybreak.

This spectre is known all around the country by the name of the Headless Horseman of Sleepy Hollow.

It is remarkable that strangers who ever come to the valley, however wide awake they may have been before they entered that sleepy region, they are sure in a little time to inhale the witching influence of the air and begin to grow imaginative—to dream dreams and see ghosts.

In this valley some person by the name of Ichabod Crane was sent for the purpose of instructing the children. He was a schoolmaster. The nickname of Crane was suitable to his person. He was tall with narrow shoulders, long arms and legs, hands that stuck a mile out of his sleeves, feet that might have served for shovels. His head was small, with huge ears, large green glassy eyes, and a long nose, so that it looked like a weathercock perched upon the roof  to tell which way the wind blew. To see him walking along a hill on a windy day, with his clothes bagging and fluttering about him, one might have mistaken him for some scarecrow escaped from a cornfield.

His school-house was a low building of one large room, made of logs, the windows partly glazed and partly patched with leaves of old copybooks. The school-house stood rather lonely just at the foot of a woody hill, with a brook running close by and a huge birch tree growing at one end of it. From hence the low murmur of his pupils’ voices might be heard in a drowsy summer’s day like the hum of a bee-hive, interrupted now and then by the loud voice of the master in the tone of command, or by the appalling sound of the birch as he urged some naughty boy along the path of knowledge. Truth to say, he was a honest man, and ever bore in mind the golden rule, «Spare the rod and spoil the child.» Ichabod Crane’s scholars certainly were not spoiled.

However he was not cruel; all this he called «doing his duty by their parents;» and he never gave a punishment without following it by the words that «he would remember it and thank him for it the longest day he had to live.»

When school-hours were over he was even the companion and playmate of the larger boys, and on holiday afternoons would accompany some of the smaller ones home who happened to have pretty sisters or good housewives. Indeed it was wise of him to keep on good terms with his pupils. The revenue arising from his school was small, and was not enough to provide him with daily bread, for he was a heavy eater and to help out his maintenance he was boarded and lodged at the houses of the farmers whose children he taught. With these he lived a week at a time, then going the rounds of the neighborhood with all his things tied up in a cotton handkerchief.

Also he assisted the farmers at their farms, helped to make hay, mended the fences, took the horses to water, drove the cows from pasture, and cut wood for the winter fire. He put aside all the dignity which he put on himself in his little empire, the school, and became wonderfully gentle and kind.

The schoolmaster is generally a man of some importance in the female circle of a neighborhood, being considered a gentleman of superior taste. From his half-itinerant life, also, he was a kind of travelling newspaper, carrying the local gossips from house to house, so that his appearance was always greeted with satisfaction. Besides, owing to his erudition and good education he was, considered a man any girl would marry. So, our schoolmaster was quite happy in the smiles of all the country girls.

He was pleased to pass long winter evenings with the old Dutch wives as they sat by the fire, with a row of apples roasting near the hearth, and listen to their marvellous tales of ghosts and goblins, and haunted fields, and haunted brooks, and haunted bridges, and haunted houses, and particularly of the headless horseman, or Galloping Hessian of the Hollow, as they sometimes called him.

But if there was a pleasure in all those tales in the cozy chimney-corner of a chamber full of a glow from the crackling wood-fire, and where, of course, no spectre dared to show its face, it was terrifying to remember them on the way home. What fearful shapes and shadows arose on his path amidst the dim of a snowy night! How often was he frightened by some shrub covered with snow, which, like a sheeted spectre, appeared on his very path! How often did he shrink at the sound of his own steps, and dread to look over his shoulder, lest he should see some ghost  coming close behind him! And how often was he thrown into complete dismay by some wind howling among the trees, in the idea that it was the Galloping Hessian on one of his nightly walks!

All these, however, were mere terrors of the night, phantoms of the mind that walk in darkness; yet daylight put an end to all these evils; and he would have passed a pleasant life of it, in despite of the devil and all his works, if his path had not been crossed by a being that causes more trouble  to mortal man than ghosts, goblins, and the whole race of witches put together, and that was—a WOMAN.

You can also read online the story «The Legend of Sleepy Hollow» on the websites:

More English stories to read online for you:
3 thoughts on “W. Irving. The Legend of Sleepy Hollow (in English, adapted for advanced)”