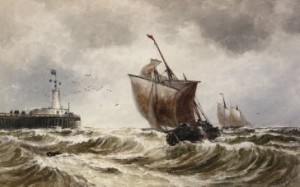 Thomas Hardy. To Please His Wife  (in English, reading for upper-intermediate)

It was getting darker in Havenpool Town. The Sunday service in the church had just ended and the people were rising with relief from their knees to leave.

For the moment the silence was so complete that the sea could be heard outside the harbour. Then it was broken by the footsteps and the dark figure of a man in a sailor’s clothes appeared against the light in the doorway.

The parson looked up from his little prayer-book and stared at the stranger.

“I beg your pardon, sir,’” said the sailor in a clear voice, addressing the parson, «I have come here to offer thanks for my narrow escape from shipwreck. I understand that it is a proper thing to do if you have no objection?»

The parson, after a moment’s pause, said that he had no objection and the clerk directed the sailor to the page in the prayer-book. The sailor knelt down and all people mechanically did the same. The parson began reading the prayer and the sailor repeated the words after him in a distinct voice. The figure of the sailor who stood on his knees, facing the east and saying the prayer was clearly seen against the wall.

When his thanksgiving had come to an end, he rose; the people rose too, and all went out of church together. As soon as the sailor came out, the light fell upon his face and the old inhabitants recognized him as Shadrach Jolliffe, a young man who had not been seen at Havenpool for several years. His parents had died when he was quite young and he had early gone to sea.

He talked with this and that man as he walked, telling them about his sailing in the sea since the time he had left his native place years before and become the captain and owner of a small boat. Soon he came near to two girls who were going out of the churchyard in front of him. One was a slim and gentle creature, the other a tall, large-framed, girl. Captain Jolliffe looked at the curls of their loose hair, their backs and shoulders, down to their heels, for some time.

«Who are those girls?» he whispered to his neighbour.

«The little one is Emily Hanning; the tall one is Joanna Phippard.»

«Ah! I recollect them now.»

The sailor came closer to them and addressed to the shorter one, «Emily, you don’t know me?»

«I think I do, Mr. Jolliffe,» said Emily, looking at him shyly.

The other girl looked straight at him with her dark eyes.

«The face of Miss Joanna I don’t remember so well,» he continued.

They walked and talked together till they reached the corner of Sloop Lane where Emily Hanning lived, and, with a smile, she left them. Soon the sailor parted also with Joanna, and, having nothing to do, turned back towards Emily’s house. She lived with her father, who kept a little stationery-shop. On entering, Jolliffe found father and daughter about to begin tea.

He was warmly invited to sit at the table and all the evening was telling them the sea tales. Somehow Emily Hanning lost her heart to the sailor that Sunday night, and within a week or two there was a tender understanding between them.