He tried to scream and he was able to scream loud, just as his brain flooded down, his right eye and right ear were cut out, he was blind and deaf, all fire, all panic, all death.

His scream stopped before his mother ran through the door to his bed.

It was a good, clear September morning with a brisk wind. The doctor had just arrived, his car was before the house. In the window above, the boy stood, fully dressed. He did not wave when the doctor waved and called, ‘What’s this? Up? My God!’ The doctor almost ran upstairs. He came gasping into the bedroom.

‘What are you doing out of bed?’ he shouted. He tapped the boy’s thin chest, took his pulse and temperature. ‘Absolutely amazing! Normal. Normal, by God!’

‘I shall never be sick again in my life,’ said the boy, quietly, standing there, looking out of the window. ‘Never.’

‘I hope not. Why, you’re looking fine, Charles.’

‘Can I go to school now?’ asked Charles.

‘Tomorrow will be time enough. Do you want to go to school?’

‘I do. I like school. All the kids. I want to play with them and wrestle with them, and play with the girl’s pigtails and shake the teacher’s hand, and rub my hands on all the cloaks in the cloakroom, and I want to grow up and travel and shake hands with people all over the world, and be married and have lots of children, and go to libraries and handle books and — all of that I want to!’ said the boy, looking off into the September morning. ‘What’s the name you called me?’

‘What?’ The doctor puzzled. ‘I called you nothing but Charles.’

‘It’s better than no name at all, I guess,’ Charles shrugged.

‘I’m glad you want to go back to school,’ said the doctor.

‘I am really waiting for it,’ smiled the boy. ‘Thank you for your help, Doctor. Shake hands.’

Then, laughing, the boy went after the doctor downstairs and out to his car. His mother and father followed them.

‘Fit as a fiddle!‘ said the doctor. ‘Fantastic!’

‘And strong,’ said the father. ‘He got out of his straps himself during the night. Didn’t you, Charles?’

They all laughed, and while they were laughing, the quiet boy moved his foot on the sidewalk and put it on a number of red ants that were hurrying about on the sidewalk. Secretly, his eyes shining, while his parents talked with the old man, he saw the ants quiver, and lie still on the cement. He knew they were cold now.

The doctor drove away, waving. 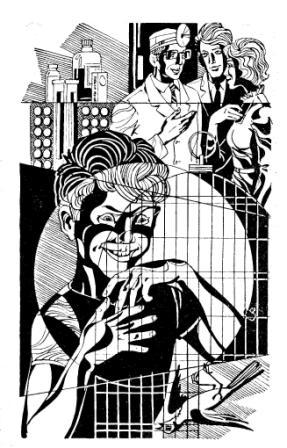 The boy walked ahead of his parents. As he walked, he looked away towards the town and began to sing something very quietly.

‘It’s good to have him well again,’ said the father.

‘Yes, he looks his normal self.’

The boy turned. He came up to his parents and kissed them both several times.

Then, without a word, he jumped up the steps into the house.

In the sitting-room, before the others entered, he quickly opened the birdcage, put his hand in, and petted the yellow canary, once.

Then he shut the cage door, stood back, and waited.