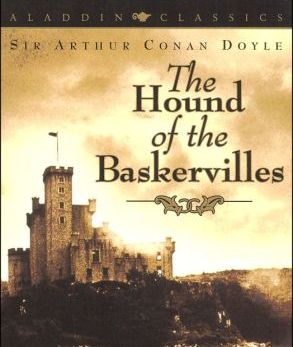 For a long time I have been obsessed with the idea to adapt the original text of the story «The Hound of the Baskervilles» to its screen version so that it could be possible to read the story and watch the film. The idea was preying on my mind just as the curse of the Baskervilles was preying on the mind of Sir Charles. Now I have some time and I am going to put the idea into action. I believe that watching the screen version will enable you to get the thrill of the frightening story. At the same time reading the story will help you better understand the plot, the motives of the characters and, of course, enlarge your vocabulary and improve your English. To my mind, it is the best way to learn English. The story «The Hound of the Baskervilles» adridged and adapted for upper-intermediate level is ready for you to be read. Good luck with learning English through the classics!

The adaptation of the story «The Hound of the Baskervilles» has the same words that the film characters of the screen version say to each other. Watch the episode => Read the corresponding part of the story => Watch the same episode again.

Dr. Mortiner’s evidence: an incredible facial distortion was explained as a symptom which is not unusual in cases of dyspnoea and death from cardiac exhaustion.

The coroner’s verdict: Sir Charles Baskerville died from the mortal effects of heart failure due to decease of the coronary arteries. His death was due to natural causes.

The Scenes from the film:

You can start now. Watch Episode 1 of the Hound of the Baskervilles and then read part 1 of the book.

Episode 1 corresponds to chapter 1 and chapter 2 of the book. You can read The Hound of the Baskervilles (in the original)

This part is based on Chapter 2

Mr. Sherlock Holmes was sitting before the fireplace, looking at his visitor.
«I came to you, Mr. Holmes because I am suddenly confronted with a most serious and extraordinary problem. And I have decided to apply to you as I know that you are a man of the precisely scientific mind.

«I think, Dr. Mortimer, you could just tell me plainly what the problem is in which you demand my assistance.»

«I have in my pocket a manuscript. It is an old manuscript,»said Dr. James Mortimer.

«The exact date is 1742,» Dr. Mortimer drew it out. «This is a family paper given to my care by Sir Charles Baskerville, whose sudden and tragic death some three months ago created so much excitement in Devonshire. I may say that I was his personal friend as well as his family doctor. He was a strong-minded man, shrewd, practical, and as unimaginative as I am myself. Yet he took this document very seriously.»

Holmes stretched out his hand for the manuscript and took it.

I looked over his shoulder at the yellow paper and the faded script. At the head was written: «Baskerville Hall,» and below in large figures: «1742»

«It is a certain legend which runs in the Baskerville family. With your permission I will read it to you.»
Holmes leaned back in his chair, placed his finger-tips together, and closed his eyes. Dr. Mortimer turned the manuscript to the light and read in a high, cracking voice the following curious, old-world narrative:

When Dr. Mortimer had finished reading, he pushed his spectacles up on his forehead and stared across at Mr. Sherlock Holmes.

Sherlock Holmes yawned and tossed the end of his cigarette into the fire. «Well?» said he.
«Do you not find it interesting?»
«To a collector of fairy tales.»
Dr. Mortimer drew a folded newspaper out of his pocket.

«Now, Mr. Holmes, we will give you something a little more recent. This is the Devon County Chronicle of May 14th of this year. It is a short account of the facts elicited at the death of Sir Charles Baskerville which occurred a few days before that date.»
My friend leaned a little forward and his expression changed. Our visitor continued reading.

The article in the newspaper:

«The recent sudden death of Sir Charles Baskerville has cast a gloom over the county.

Sir Charles made fortune in South Africa and returned to England with it. It is only two years since he took up his residence at Baskerville Hall. Being childless, he made generous donations to local and county charities. There is no reason to imagine that his death could be from any but natural causes. Sir Charles was a widower. In spite of his considerable wealth he was simple in his personal tastes, and his indoor servants at Baskerville Hall consisted of a married couple named Barrymore, a butler and a housekeeper. Their evidence showed that Sir Charles’s health had worsened, manifesting itself in changes of colour, breathlessness, and acute attacks of nervous depression.» Dr. James Mortimer, the friend and medical attendant of the deceased, has given evidence to the same effect.

The evidence of the Barrymores shows that on the fourth of May Sir Charles had declared his intention of starting next day for London, and had ordered Barrymore to prepare his luggage. That night he went out as usual for his evening walk, in the course of which he was in the habit of smoking a cigar. He never returned.

At twelve o’clock Barrymore, finding the hall door still open, became alarmed, and, lighting a lantern, went in search of his master. The day had been wet, and Sir Charles’s footmarks were easily traced down the alley. Halfway down this walk there is a gate which leads out on to the moor. There were indications that Sir Charles had stood for some little time here. He then went down the alley, and it was at the far end of it that his body was discovered.

Barrymore noticed that his master’s footprints changed their shape since the moment he passed the moor gate, and that farther he may have been walking upon his toes.  No signs of violence were discovered upon Sir Charles’s person, although the doctor’s evidence pointed to an almost incredible facial distortion. The distortion was so great that Dr. Mortimer refused at first to believe that it was indeed his friend and patient who lay before him. The death was explained as a form of cardiac exhaustion.

The coroner noticed that  it might have been difficult to find a tenant for Baskerville Hall. The next of kin is Mr. Henry Baskerville is the son of Sir Charles Baskerville’s younger brother. The young man was heard to be in America, and inquiries are being made to inform him of his good fortune.»

Dr. Mortimer refolded his paper and replaced it in his pocket.

«Those are the public facts, Mr. Holmes, in connection with the death of Sir Charles Baskerville.»
«This article, you say, contains all the public facts?»
«It does.»
«Then let me have the private ones.» He leaned back and put his finger-tips together.

«I am telling you which I have not confided to anyone,» said Dr. Mortimer emotionally. During the investigation I had withhold information from the coroner’s court. My motive for withholding it from the coroner’s inquiry is that a man of science shrinks from placing himself in the public position of seeming to indorse a popular superstition.»

«The moor is almost uninhabited,» he continued «and those who live near each other are very close. For this reason I saw a good deal of Sir Charles Baskerville. With the exception of Mr. Frankland and Mr. Stapleton, the naturalist, there are no other men of education within many miles. Sir Charles was a retiring man, but the chance of his illness brought us together, and common interests in science kept us so.

Within the last few months I noticed that Sir Charles’s nervous system was strained to the breaking point. At first I could understand why, but later I realized that he had taken the family legend exceedingly to heart – so much so that, although he would walk in his own grounds, nothing would induce him to go out upon the moor at night. He was honestly convinced that a dreadful fate overhung his family. It was preying on his mind. Once he has asked me whether I had on my medical journeys at night ever seen any strange creature or heard the baying of a hound. The latter question he put to me several times, and always with a voice which vibrated with excitement.

I can well remember driving up to his house in the evening some three weeks before the fatal event. He was standing at his hall door. When I got out of my gig, I saw his eyes stare past me with an expression of the most dreadful horror. I quickly turned round and caught a glimpse of something which I took to be a large black calf. Together we went down to the spot where the animal had been and look around for it. It was gone, however, and the incident appeared to make the worst impression upon his mind. I stayed with him all the evening, and he told me the legend of the Hound of the Baskervilles which I read to you.

It was at my advice that Sir Charles should go to London. His heart was affected by the constant anxiety in which he lived. His nervous state was having a serious effect upon his health. I thought that the distractions of town would do him good. Mr. Stapleton, a mutual friend who was much concerned at his state of health, was of the same opinion. Suddenly came this terrible catastrophe.

On the night of Sir Charles’s death Barrymore, the butler, who made the discovery, sent for me. Immediately I started for Baskerville Hall and arrived within an hour of the event. I followed the footsteps down the yew alley, I saw the spot at the moor gate where he seemed to have waited and I remarked the change in the shape of the prints after that. Also I noted that there were no other footsteps save those of Barrymore on the soft gravel, and finally I carefully examined the body, which had not been touched until my arrival. Sir Charles lay on his face, his arms out, his fingers dug into the ground, and his features convulsed with some strong emotion to such an extent that I could hardly have sworn to his identity. There was certainly no physical injury of any kind. But one false statement was made by Barrymore at the inquest. He said that there were no traces upon the ground round the body. He did not observe any. But I did – some little distance off, but fresh and clear.»
«Footprints?»
«Footprints. »
«A man’s or a woman’s?»
Dr. Mortimer looked strangely at us for an instant, and his voice sank almost to a whisper as he answered:
«Mr. Holmes, they were the footprints of a gigantic hound!»

There was a thrill in the doctor’s voice. Holmes leaned forward in his excitement and his eyes had the hard, dry glitter. He was keenly interested.
«You saw this?»
«As clearly as I see you.»
«And you said nothing?»
«What was the use?»