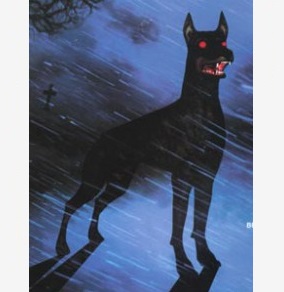 The Legend of the Hound of Baskervilles (in English, for intermediate)

Of the origin of the Hound of the Baskervilles there have been many statements, yet as I come in a direct line from Hugo Baskerville, and as I had the story from my father, who also had it from his father, I have written it down with all belief that it happened . And you, my sons, believe that the same Justice which punishes sin may also forgive it. Learn then from this story not to fear the past, but rather to be careful in the future not to loose the evil to our undoing. Know then that in the old times this Manor of Baskerville was held by Hugo who was a most wild and godless man. His neighbours might have forgiven this, seeing that saints have never lived in those lands, but there was in him a certain cruelty which made his name a notorious one through the West. It happened that this Hugo came to love (if we can call “love” so dark a passion) the daughter of a man who held lands near the Baskerville estate. But the young girl, being of good repute, would ever avoid him, for she feared his evil name. But one day this Hugo, with five or six of his wicked companions, stole down upon the farm and carried off the girl, while her father and brothers were away from home.

They brought the girl to the Baskerville Hall and locked her in an upper room, while Hugo and his friends sat down to a long dinner, as they usually did at night. The poor girl upstairs was terribly frightened at the singing and shouting and awful words which came up to her from below. At last in the stress of her fear she got out of the window and went down the wall by the ivy which covered it. Then she ran towards her home across the moors. Some time later Hugo left his guests, went upstairs and found the cage empty and the bird escaped. He became mad, rushing down the stairs into the dining-hall, and cried aloud before all the company that he would that very night give his body and soul to the Powers of Evil if he could catch the girl. One of the companions, more wicked or more drunken than the rest, cried out that they should put the hounds upon her. Hugo ran from the house and gave the hounds a kerchief of the girl’s, and so off they started after her in the moonlight over the moor.

They, thirteen in number, took horses and started in pursuit, too. The moon shone clear above them, and they rode fast, following that course which the girl must have taken. They had gone a mile or two when they passed one of the shepherds upon the moorlands, and they asked him if he had seen the hunt. The man, as the story goes, was so crazed with fear that he could hardly speak, but at last he said that he had indeed seen the unhappy girl, with the hounds upon her track. ‘But I have seen more than that,’ said he, ‘for Hugo Baskerville passed me upon his black horse followed by a gigantic back hound. So the drunken men left the shepherd and rode on. But soon their skins turned cold for when they saw the black horse went past with an empty saddle. They moved close together, for a great fear was on them, but they still ran on over the moor. At last the company had stopped.

They saw a broad space in which stood two of those great stones. The moon was shining bright upon the clearing, and there in the centre lay the unhappy girl where she had fallen, dead of fear and of fatigue. But it was not the sight of her body, nor yet was it that of the body of Hugo Baskerville lying near her, which raised the hair upon the heads of these three men, but it was that, standing over Hugo, and plucking at his throat, there stood a great, black beast, shaped like a hound, yet larger than any hound. And as they looked the thing tore the throat out of Hugo Baskerville. Then it turned its blazing eyes and dripping jaws upon them, and the three cried with fear and rode for dear life, still screaming, across the moor. One man, it is said, died that very night of what he had seen, and the other two were broken men for the rest of their days. Such is the tale, my sons, which have plagued the family ever since. Many of the family have been unhappy in their deaths, which have been sudden, bloody, and mysterious. Yet may we save ourselves in the goodness of Providence, which would not forever punish the innocent beyond that third or fourth generation. To that Providence, my sons, I hereby commend you, and I advise you not to cross the moor in those dark hours when the powers of evil are exalted.”

This from Hugo Baskerville to his sons Rodger and John.

One thought on “The legend of the Hound of Baskervilles (in English, adapted)”