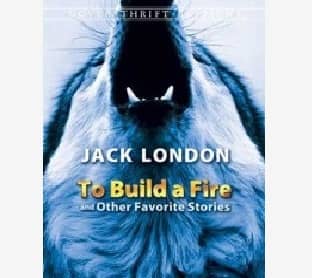 Jack London is famous all over the world. And he is still the most popular writer in Russia. His stories are about life and death, courage and cowardice, love and treachery. He wrote more than 200 stories. All of them are great, it was difficult to find the most thrilling ones. Enjoy reading Jack London’s stories online in Russian and in English.

He travels fastest who travels alone . . . but not after the frost has dropped below zero fifty degrees or more.

The man walked down the trail on a cold, gray day. Pure white snow and ice covered the Earth for as far as he could see. This was his first winter in Alaska. He was wearing heavy clothes and fur boots. But he still felt cold and uncomfortable.

The story «To Build a Fire» (read and listen online)

2. The Story of Keesh (in English, adapted, level pre-intermediate)

Keesh lived at the edge of the polar sea. He had seen thirteen suns in the Eskimo way of keeping time. Among the Eskimos, the sun each winter leaves the land in darkness. And the next year, a new sun returns, so it might be warm again.

The father of Keesh had been a brave man. But he had died hunting for food. Keesh was his only son. Keesh lived along with his mother, Ikeega.

One night, the village council met in the big igloo of Klosh-kwan, the chief. Keesh was there with the others. He listened, then waited for silence.

3. The Law of Life (in English, adapted, level pre-intermediate)

The old Indian was sitting in the snow. It was Koskoosh, former chief of his tribe. Now, all he could do was sit and listen to the others. His eyes were old.  He could not see, but his ears were wide open to every sound.

“Aha.” That was the sound of his daughter, Sit-cum-to-ha.  She was beating the dogs, trying to make them stand in front of the snow sleds.  He was forgotten by her, and by the others, too. They had to look for new hunting grounds. The long, snowy ride waited. The days of the northlands were growing short. The tribe could not wait for death. Koskoosh was dying.

The story «The Law of Life» (for pre-intermediate, read and listen online)

«Leave me alone!»  he protested. But she continued waking him up. When he felt the cold of the room, his eyes opened.  And he gave up.

She took the lamp and left him in darkness. He did not mind the darkness. He put on his clothes and went out into the kitchen,  pulled a chair to the table and sat down.

The story «The Apostate» (pre-intermediate, read and listen online)

5. The God of His Fathers (in English, adapted, level pre-intermediate)

Silently the wolves circled the herd of caribou deer. Gray bellies close to the ground, the wolves in the pack surrounded a pregnant deer. They pulled her down and tore out her throat. The rest of the caribou herd raced off in a hundred directions. The wolves began to feed.

Once again the Alaska territory was the scene of silent death. Here, in its ancient forests, the strong had killed the weak for thousands and thousands of years.

The story «The God of His Fathers» (read and listen online)