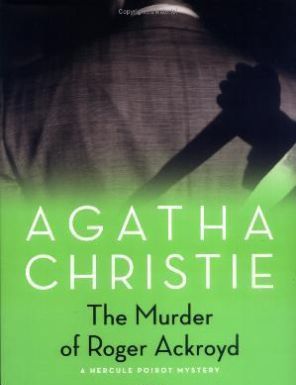 It is a masterpiece by Agatha Christie. This detective story made her famous in 1926. And it is still worth reading now. The plot is not very intricate. It starts with a murder and the famous detective Hercule Poirot is asked to investigate it. But the murder turns out to be rather mysterious… Yet Hercule Poirot did his best and found the murderer who was… But I won’t tell you because it is the surprise ending that makes this story special.
If you are an advanced English learner we suggest that you should read the story «The Murder of Roger Ackroyd» in the original. The first chapter of the story (with audio) is available on the website.

For those who learn English, we present the story «The Murder of Roger Ackroyd» in the adapted version with tasks (for the pre-intermediate level)

Agatha Christie. The Murder of Roger Ackroyd (in English, in the original)

Mrs. Ferrars died on the night of the 16th/17th September—a Thursday. I was sent for at eight o’clock on the morning of Friday the 17th. There was nothing to be done. She had been dead some hours.

It was just a few minutes after nine when I reached home once more. I opened the front door with my latchkey, and purposely delayed a few moments in the hall, hanging up my hat and the light overcoat that I had deemed a wise precaution against the chill of an early autumn morning. To tell the truth, I was considerably upset and worried. I am not going to pretend that at that moment I foresaw the events of the next few weeks. I emphatically did not do so.

But my instinct told me that there were stirring times ahead.

From the dining room on my left there came the rattle of teacups and the short, dry cough of my sister Caroline.

An unnecessary question, since who else could it be? To tell the truth, it was precisely my sister Caroline who was the cause of my few minutes’ delay. The motto of the mongoose family, so Mr. Kipling tells us, is: ‘Go and find out.’ If Caroline ever adopts a crest, I should certainly suggest a mongoose rampant. One might omit the first part of the motto. Caroline can do any amount of finding out by sitting placidly at home. I don’t know how she manages it, but there it is. I suspect that the servants and the tradesmen constitute her Intelligence Corps. When she goes out, it is not to gather in information, but to spread it. At that, too, she is an amazing expert.

It was really this last named trait of hers which was causing me these pangs of indecision. Whatever I told Caroline now concerning the demise of Mrs. Ferrars would be common knowledge all over the village within the space of an hour and a half. As a professional man, I naturally aim at discretion. Therefore I have got into the habit of continually withholding all information possible from my sister.

She usually finds out just the same, but I have the moral satisfaction of knowing that I am in no way to blame.

Mrs. Ferrars’ husband died just over a year ago, and Caroline has constantly asserted, without the least foundation for the assertion, that his wife poisoned him.

She scorns my invariable rejoinder that Mr. Ferrars died of acute gastritis, helped on by habitual overindulgence in alcoholic beverages. The symptoms of gastritis and arsenical poisoning are not, I agree, unlike, but Caroline bases her accusation on quite different lines.

‘You’ve only got to look at her,’ I have heard her say.

Mrs. Ferrars, though not in her first youth, was a very attractive woman, and her clothes, though simple, always seemed to fit her very well, but all the same, lots of women buy their clothes in Paris, and have not, on that account, necessarily poisoned their husbands.

As I stood hesitating in the hall, with all this passing through my mind, Caroline’s voice came again, with a sharper note in it.

‘What on earth are you doing out there, James? Why don’t you come and get your breakfast?’

‘Just coming, my dear,’ I said hastily. ‘I’ve been hanging up my overcoat.’

‘You could have hung up half a dozen overcoats in this time.’

She was quite right. I could have.

I walked into the dining room, gave Caroline the accustomed peck on the cheek, and sat down to eggs and bacon. The bacon was rather cold.

Annie is the house parlour maid. A nice girl, but an inveterate talker.

There was a pause. I continued to eat eggs and bacon. My sister’s nose, which is long and thin, quivered a little at the tip, as it always does when she is interested or excited over anything.

‘A sad business. Nothing to be done. Must have died in her sleep.’

‘I know,’ said my sister again.

This time I was annoyed.

‘You can’t know,’ I snapped. ‘I didn’t know myself until I got there, and haven’t mentioned it to a soul yet. If that girl Annie knows, she must be a clairvoyant.’

‘It wasn’t Annie who told me. It was the milkman. He had it from the Ferrarses’ cook.’

As I say, there is no need for Caroline to go out to get information. She sits at home and it comes to her.

My sister continued: ‘What did she die of? Heart failure?’

‘Didn’t the milkman tell you that?’ I inquired sarcastically.

Sarcasm is wasted on Caroline. She takes it seriously and answers accordingly.

‘He didn’t know,’ she explained.

After all, Caroline was bound to hear sooner or later. She might as well hear from me.

‘She died of an overdose of veronal. She’s been taking it lately for sleeplessness. Must have taken too much.’

‘Nonsense,’ said Caroline immediately. ‘She took it on purpose. Don’t tell me!’

It is odd, when you have a secret belief of your own which you do not wish to acknowledge, the voicing of it by someone else will rouse you to a fury of denial. I burst immediately into indignant speech.

‘There you go again,’ I said. ‘Rushing along without rhyme or reason. Why on earth should Mrs. Ferrars wish to commit suicide? A widow, fairly young still, very well off, good health, and nothing to do but enjoy life. It’s absurd.’

‘Not at all. Even you must have noticed how different she has been looking lately. It’s been coming on for the last six months. She’s looked positively hag-ridden. And you have just admitted that she hasn’t been able to sleep.’

‘What is your diagnosis?’ I demanded coldly. ‘An unfortunate love affair, I suppose?’

My sister shook her head. ‘Remorse,’ she said, with great gusto.

‘Yes. You never would believe me when I told you she poisoned her husband. I’m more than ever convinced of it now.’

‘I don’t think you’re very logical,’ I objected. ‘Surely if a woman committed a crime like murder, she’d be sufficiently cold-blooded to enjoy the fruits of it without any weak-minded sentimentality such as repentance.’

Caroline shook her head. ‘There probably are women like that—but Mrs. Ferrars wasn’t one of them. She was a mass of nerves. An overmastering impulse drove her on to get rid of her husband because she was the sort of person who simply can’t endure suffering of any kind, and there’s no doubt that the wife of a man like Ashley Ferrars must have had to suffer a good deal.’

‘And ever since she’s been haunted by what she did. I can’t help feeling sorry for her.’

I don’t think Caroline ever felt sorry for Mrs. Ferrars whilst she was alive. Now that she has gone where (presumably) Paris frocks can no longer be worn, Caroline is prepared to indulge in the softer emotions of pity and comprehension.

I told her firmly that her whole idea was nonsense. I was all the more firm because I secretly agreed with some part, at least, of what she had said. But it is all wrong that Caroline should arrive at the truth simply by a kind of inspired guesswork. I wasn’t going to encourage that sort of thing. She will go round the village airing her views, and everyone will think that she is doing so on medical data supplied by me. Life is very trying.

‘Nonsense,’ said Caroline, in reply to my strictures. ‘You’ll see. Ten to one she’s left a letter confessing everything.’

‘She didn’t leave a letter of any kind,’ I said sharply, and not seeing where the admission was going to land me.

‘Oh!’ said Caroline. ‘So you did inquire about that, did you? I believe, James, that in your heart of hearts, you think very much as I do. You’re a precious old humbug.’

‘One always has to take the possibility of suicide into consideration,’ I said impressively.

‘Will there be an inquest?’

‘There may be. It all depends. If I am able to declare myself absolutely satisfied that the overdose was taken accidentally, an inquest might be dispensed with.’

‘And are you absolutely satisfied?’ asked my sister shrewdly.

I did not answer, but got up from the table.

THE END OF CHAPTER 1

Agatha Christie and her books